Row houses are ubiquitous in Philadelphia. They’re so common that their presence is taken for granted and this magical intersection is often overlooked. The Rowhouse Workshop offers an intimate glimpse into four row houses located in South, North, and West Philadelphia.

The Rowhouse Project initially sought to examine how the architecture of row houses interacts with their blocks. However, as the project progressed, the research team at Interface Studio Architects realized the stories of the people who lived in those row houses were essential to the study and the focus of the project adapted. I have observed this as well; that the houses and people who occupy a block are inevitably intertwined either passively when sounds are overheard via open windows or through walls, or actively via stoop chats or block parties. Hidden City Philadelphia wrote a review that dives deeper into the background of the project.

The opening for the exhibition was this past Friday and, as Cherry Street Pier is close by and it was a lovely evening, I decided to venture out.

The best way to consume the exhibition is to start at the back and read the notes visitors left about their own blocks. 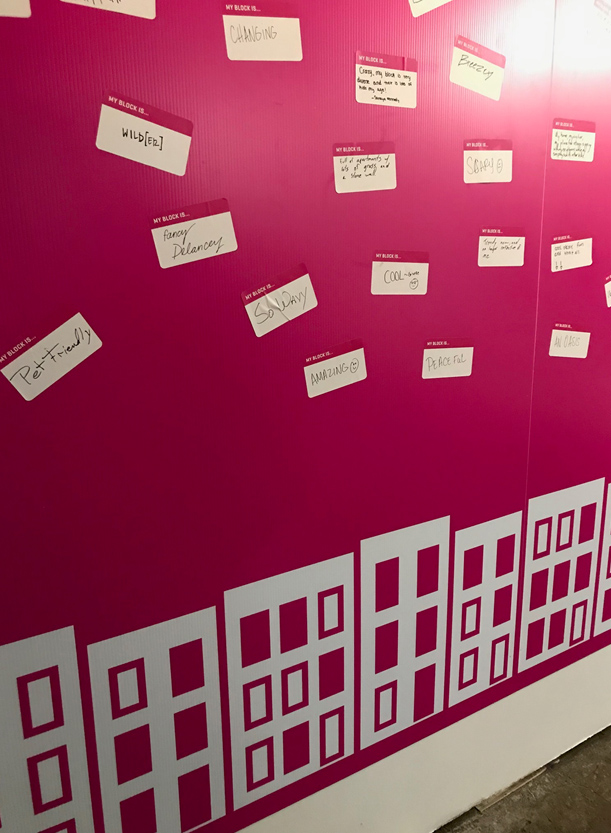 Next, visitors work their way through the four row houses. Each section includes large format photos of the house and its block. There are even stoops you can sit on providing an immersive experience. 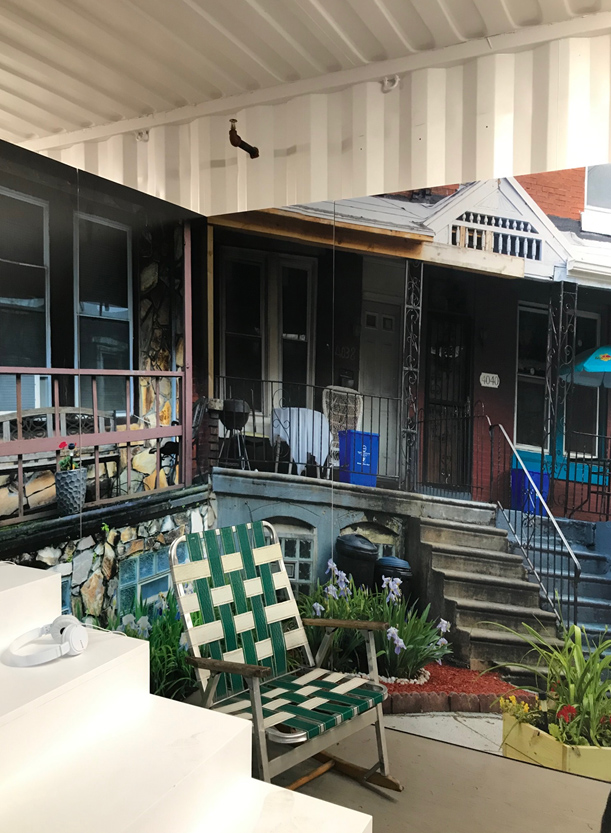 Within the section is an architectural drawing of the block that shows where the row house fits among its neighbors. Another drawing shows the cross-section of the home showing what each floor is used for.

Things get personal from there. Visitors are introduced to the residents and their families, histories, and relationships with their row houses and the block. Headphones provide a block party set-list chosen by the residents to immerse visitors further into life on the block. Recipes for the residents’ favorite dishes were provided as take-aways.

Row houses are often initially seen as homogeneous, uniform facades but when the aspects of culture, tradition, and family are introduced, a deeper perspective is evident, illustrating that every row house is unique. Even without meeting the residents directly, you can see subtle differences when walking down a row house block and observing how residents decorate their row houses. Once you start to really look, you’ll find that no two are the same.

The row houses included in the exhibition represent late 19th / early 20th Century row houses. I asked why several of the more interesting row house architectural styles in Philadelphia, such as the early-American Federal or the unique Trinity, were not included and was informed that the researchers had reached out to block captains and these were the few who were willing and able to participate. With more than 400,000 row houses in Philadelphia, representing every architectural style, there is motivation and plans to expand the project to include more row houses. Attendees interested in participating had an opportunity to leave their information and details via questionnaire.

The opening was well attended and I particularly enjoyed seeing the excitement of those attendees who could remark with glee that “that’s my house/block!” I think we’re all pretty proud of our row houses but there’s something extra about having one’s row house featured in a special event and to know that the story of your row house will be preserved.

The free exhibition, going on until June 30, is located at the lovely Cherry Street Pier which is along the Delaware River and a short walk from Old City.