My post about Creating an Eclectic yet Established Style turned out to be long enough for two posts. So, while that post gets the ball rolling, this post will share how we’ve applied the 40/50/10 ratio to our own row house.

What I love about the modifier eclectic, is that it says it’s OK to be less than perfect and that it’s OK to take a few liberties. For us, this is helpful because the prevailing style during the 18th Century colonial and early American period is Georgian / Federal / Adams (see our sampler post and architectural guide post) and Rococo (see https://en.wikipedia.org/?title=Rococo), all of which are expensive to attain. 100% is quite beyond our means so being able to take an eclectic approach has been very liberating for us, and many vintage home dwellers alike.

When we were looking for our row house, seeing as Philadelphia has plenty of 18th and early 19th Century architecture to choose from, there was no doubt that we would end up in a Federal row house. To provide a little background, the Federal style was a departure from the Georgian style du jour of the 18th Century. As the colonies moved closer and closer to independence, early Americans wanted to separate themselves from the Crown and Country. The simplified Federal style reflected this in it’s reduction of the opulent styling of the period. Practically speaking, unless you have an enormous budget, if you are looking for an 18th Century home in America, you’re getting a Federal house.

Regarding our interpretation of Eclectic Colonial style, having an authentic period home that has only been gently renovated, makes it quite a bit easier to embrace the style as the dimensions of the rooms are already perfectly suited. However, I find that the Rococo style is really too fussy for every day life in a small row house and even reproduction furniture and fabrics (my favorite!) are expensive. I had done extensive research regarding what an ideal 18th Century home should look like, but additional research was required to find something we could live with day-in and day-out. This is the difference from dreaming about your almost 18th Century home to actually living in it. Thankfully Colonial Williamsburg, Virginia does have examples of modest period homes to explore and a few rooms at the Metropolitan Museum of Art in New York are more modestly furnished; both excellent starting points.

In the previous post, I suggest utilizing mood boards to help assemble a collection of ideas that follow the ratio of 40% following the rules, 50% representing the rules, and 10% random. I have boards for each room of the house as well as textiles and color palette. Following, is the ratio at work and our Eclectic Colonial work in progress.

I’m starting with the details because nothing says eclectic like a collection of stuff. Our built-in shelves began their life as a closet to the right of the fireplace. Every item has a story but note the white ceramic pineapple. The pineapple is a symbol of welcome at Colonial Williamsburg and during the 18th Century, a popular type of dishes produced by Wedgewood, called Queensware, was white and very decorative. 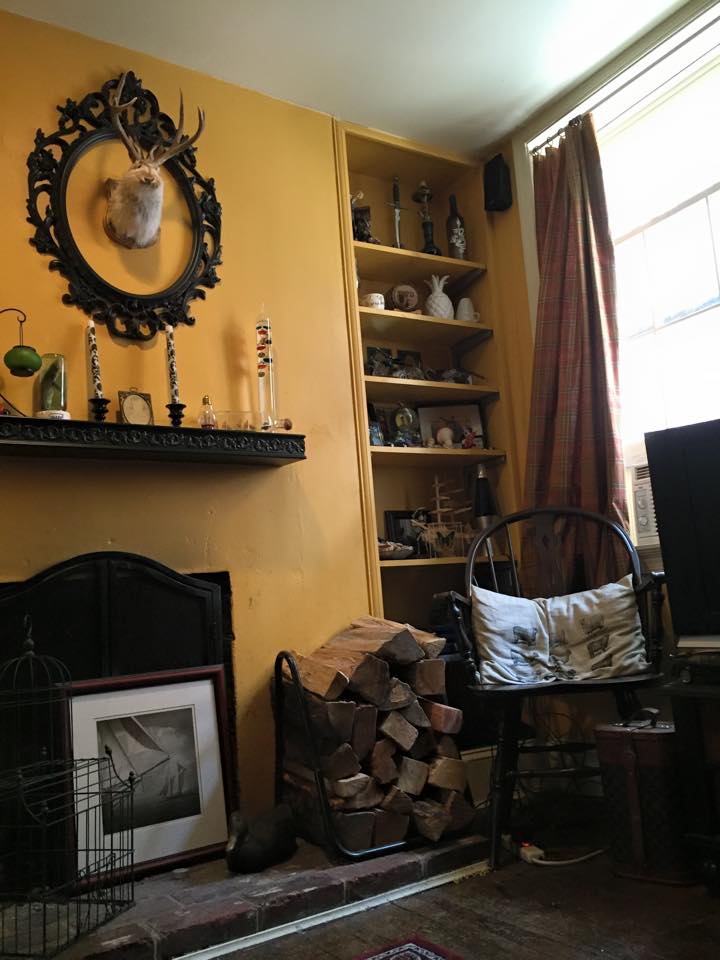 This is the entire front left corner of the living room. We are lucky to have three working fireplaces in our house. Finding the 40% of authenticity in our house is almost accomplished just because it’s a period home. However, we’ve had a little fun and here is where some of our eclectic approach is apparent. Taxidermy above the fireplace was not uncommon in the 18th Century, however we have a jackalope. We’ve put him into a frame, which is almost Rococo in style but it’s a modern interpretation. The fireplace is off-set which means we can’t really utilize a mantel without distroying half of it. So, we use a floating shelf, which is very modern, but the floral design on the shelf ties it to the frame and pulls the entire area together. The overall idea is a nod to history but it’s definitely an eclectic interpretation. To bring the area back into the proper style, we have a nice Windsor chair which would have been very much at home in just about any early American home.

No 18th Century house of average means would be complete without a Girandole Mirror. We like to refer to ours as the portal since it’s rather large considering the space. So far we haven’t been transported to the 18th Century, much to my disappointment. What it does do, is distract the eye from the television, a necessary evil. Unfortunately, the size of the t.v. makes it very difficult to hide inside a chest and what options we do have, are really expensive and take up too much floor space.

This secretary in our office was a fantastic second-hand find. IKEA used to have a collection of furniture called Lesvik which was based on simple Swedish country design from the 18th Century. We actually have a few pieces from this collection because they’re perfect in scale and style for our house. And unlike antiques or reproductions, we don’t have to be overly careful with it. IKEA seems to be phasing out the line which is sort of depressing because the spiral stairs in our house makes getting furniture into the upper floors very difficult and flat pack is very convenient. As home decor is a work in progress, please ignore the baskets.

Children’s bedrooms are always very, very difficult to work with. Fine furniture doesn’t stand a chance and we couldn’t get it up the stairs anyway. Once again, the architecture of the room and the original mantel and fireplace do the work of tying the room to it’s Colonial roots. This room maintains it’s original flooring as well. As our daughter gets older, we hope to pull in more history and a little less chaos.

In a small Federal row house, it is very likely that you will have at least one dormer attic bedroom. Once again, architecture helps us maintain a strong tie to the Colonial style. The bed is from the Lesvik line at IKEA which resembles 18th Century Swedish style, similar to the secretary in the office area. On the wall, is a charming oil painting of a tall mast ship, also appropriate.

From there we’ve diviated a bit, mostly because any furniture that needs to go up the stairs needs to be dismantled. We were able to hoist the mattress over the balcony but mattresses are squishy. I’m very reluctant to try something make of wood so modern Swedish it is. I did see a fantastic tutorial on how to turn otherwise plain dressers like ours into something that resembles an old steamer chest. Perhaps a DIY project for my upcoming vacation week.

Often, when a vintage house is renovated, many details are removed. In the case of our house, we actually gained a more historic feature than our house could have had originally because of it’s very small size (10 by 10 footprint). At first, the kitchen was located where our dining room now occupies and through to the 1990s, you could still cook in the fireplace. During the mid-20th Century, an extension was added to the back of the house and the kitchen was moved over, creating what is very much like a traitional 18th Century keeping room (http://www.wisegeek.org/what-is-a-keeping-room.htm). The low ceiling and exposed beams are exactly what the house would have looked like when it was built in 1832. Again, we relied on IKEA’s Lesvik to provide a china cabinet that looks similar to pieces from the period. Windsor chairs would have been appropriate for a dining area but since the room is small, eventually I would like to get ladder-back chairs which take up less square footage but are very appropriate. The table is a thoughtful deviation that we chose because you can bump into it and not spill anything and it extends to seat eight(!), which we have done.

Oh, and our skeleton is a Halloween decoration we don’t have room to store off-season so he sits at our table. Hector sports a tri-corner hat and a frock coat, both stylish in the early 18th Century. At least someone gets to wear historic clothing all the time.

Finally, housewares are the easiest to begin with when looking to create a cohesive style. There are many resources and suppliers of reproduction 18th Century textiles, glazeware, pewter, and more but it isn’t cheap and unlike furniture, spills and breaks happen. Because of this, I’ve been taking liberties with the textiles I use around the house. Sometimes really departing from the style quite a bit, which is perfectly OK when you’re being eclectic with your interpretation.

So there you have it. What I would consider Eclectic Colonial / 18th Century to actually be, and it really isn’t hard to adapt our approach for any style. Just takes some reflection and determination.